Alberto grew up in Madrid where he also attended law school. During his time at there an interest for wine emerged, perhaps sparked on one of his trips down to Cádiz where Alberto had family working with wine. Eventually Alberto earned a diploma in oenology, in that way continuing his family’s wine legacy, whom have been wine producers since the late 1800’s. Today Alberto lives with in Cádiz. This is one of the regions Alberto grows vines but he also does so in Valencia, Rioja, Galicia, and others.

Alberto is involved in many wine projects around Spain and wherever he goes the idea is the same. To create genuine wine of the land where it grows, and to the history part, of grapes that are indigenous to the place. All through respecting nature, practicing organic farming and sensible, hands-off winemaking. Alberto dedicates much of his time researching Spanish wine history through documents, writings and the memory of older generations. Especially one iconic piece of Spanish wine literature has proven to be very valuable: Simon de Rojas Clemente y Rubios documentations about varieties and there characteristics in Jerez from 1807. The examples of Alberto’s fascinating work are many and equally unique. In the end of this sheet we will present specifics for the given wine.

Ever since Alberto set out on his mission he has been in search of truly great vineyards, sites that out-perform and gives the potential of producing the best wine in a given region. This work has involved identifying indigenous varieties and old vines grown organically in balanced, low-yielding, soils. Alberto is today one of the main figures and one of only a handful producers, as the likes of Raúl Pérez and Envinate, taking care of the old viticultural heritage Spain has; saving old varieties, recuperating old vineyards/regions as well as making wine based on terroir/site rather than blending them all together. These people are in the forefront of bringing Spain into a new (or old so to speak) era of wine. 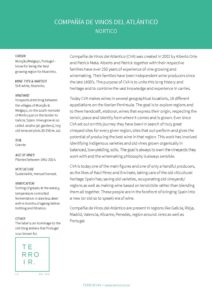