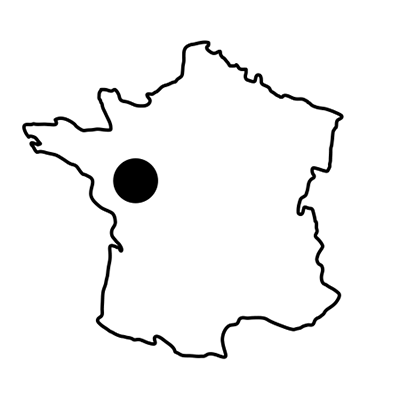 Evelyne de Pontbriand took over her venerable family estate known historically as the Château des Vaults but now as Domaine du Closel in 2001 in a career change from teaching French literature. Her mother Michèle de Jessey was a notable figure in the Chenin-only appellation of Savennières, having inherited the estate from her aunt, Madame du Closel; she was devoted to all things Savennières, and even became its president, the first woman to run an AOC. Evelyne inherited her mother’s passion and technical acuity and now meticulously manages the estate, which comprises 14 hectares of Chenin Blanc (as well as 3 of Cabernets Franc and Sauvignon).

The estate was certified organic in 2006 and received full biodynamic certification as of the 2015 vintage. Savennières is a famously unique, intense, savory and structured expression of Chenin Blanc, thanks to the preponderance of schist, a form of slate, in its soils; Evelyne has learned from her 16 years on the job that
meticulous, minimal farming and winemaking is the most effective way to convey its essence.

Domaine du Closel is one of the leading estates in Savennières and dates back to 1495. The estate holds about 16 hectares of land, 14 ha covered with vines. The estate is located in the western part of Savennières based on schist and volcanic soils, some of the vines are up to 70 years old. The Savannières appellation holds about 140 hectares in total, which makes it a very small appellation. They have great vineyard work and very sensible practices (no
thinning, gobelet planting, selection massale.) The estate is biodynamic certified since 2015, in the forefront of
research of natural methods, since 2017 they also hold the certification of Biodyvin.